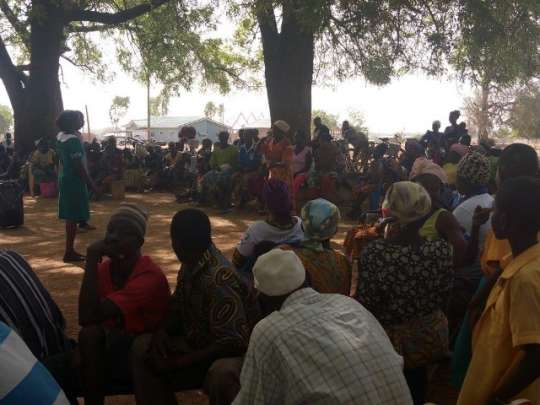 Siniensi (UE), March 31, GNA – The Meta Foundation, a local non-governmental organisation (NGO), operating in northern Ghana, has expressed concern about the low birth registration of infants at the Birth and Death Registry.

The Programme Manager of the Foundation, Mr David Amozebega, who expressed the concern at a durbar at the Siniensi community in the Builsa North District of the Upper East Region, said a baseline survey conducted by his outfit, indicated that many parents were not paying attention to the birth registration of their new born babies.

He said birth registration, which was a government policy was crucial for policy formulation and implementation particularly in the area of health, education, agriculture and nutrition and should not be neglected.

The Programme Manager said child marriage was another challenge in the Region and the NGO with support from UNICEF was implementing a project dubbed: “Sustaining Human Progress and Reducing Vulnerabilities and Building Resilience,” in 80 communities in the Builsa North and the Nabdam Districts of the Region.

Mr Amozebega said the project which was working in collaboration with the Ghana Health Service, the Birth and Death Registry, the traditional authorities, opinion leaders and assembly members, was aimed at promoting birth registration, ending child and forced marriages, promotion of skill delivery at health facilities, exclusive breastfeeding and increase school enrolment among others.

Educating the communities about the relevance of birth registration, Mr John Yalmon Badengbanoya, the Birth and Death Registrar for Builsa North and Builsa South Districts, said birth certificate was important in one’s life as it is needed for processing documents.

“The importance of birth registration cannot be overemphasized. It establishes the accurate age of the child particularly in accessing education and health, determines the voting age, provide an avenue for judges to ascertain the true age of rape cases as well as use it as a basis for gaining employment as well as used for policy formulation,” he said.

He told the people that it was free of charge to register a child from zero to 12 months old.riod.

The Chief of Siniensi, Nab Gilbert Apig-Jiak Afulang, commended the NGO and UNICEF for implementing the project in the area.

He said the incidence of child marriage was a human factor rather than poverty, and pledged that plans were far advanced by the traditional council to constitute a committee to address the phenomenon and to also help ensure that parents patronise the Birth and Death Registry.

Mrs Georgina Amidu, the Communication for Development Officer of UNICEF, said the high incidence of child marriage gave the country a bad image and called for collective efforts from stakeholders including traditional rulers, civil society organisations, Municipal and District Assemblies to join hands in fighting the canker.

Most of the community members at the durbar said they were not aware of the fact that it was a criminal offense to give out their daughters below the age of 18 for marriage and did not also know the relevance of the birth registration.L